The Arkansas School for the Deaf has a rich history of providing quality educational services to meet the immediate and future needs of deaf and hard of hearing children of Arkansas. The year of 1850, the first class in Arkansas for "deaf-mutes" - as deaf children were called before it was recognized that such children have voice which can be trained in speech - was taught by John W Woodward in Clarksville. Woodward was born in Virginia in 1820 and educated in a school for deaf children in Paris, France. The small school organized in Clarksville consisted at first of two pupils, later of five, and was conduced in the home of Augustus Ward.

In 1860, Asa Clark organized a second school for the deaf in his home in Fort Smith. A class of six was soon formed and Matthew Clark, a graduate of the New York Institution for the Deaf and Dumb which was founded in the year of 1818, was the instructor. The school continued until October 1861, it was forcibly closed because of the chaotic conditions in the state due to the Civil War.

The years immediately following the Civil War were the darkest in the history of the state. However, it was in this period that a permanent school for deaf children was established. On July 10, 1867, Joseph Mount, a deaf man who had received instruction at the Pennsylvania Institute for the Deaf, opened a school for deaf children in Little Rock. The school was supported by private subscriptions and from funds given by the City of Little Rock. At times the prospects for continuance were gloomy, the school being compelled to move five times the first year from one rented house to another. In 1868, the Republican Governor, Powell Clayton, recommended in his message to the general assembly that the struggling school be taken over as a state institution. An act to this effect was approved July 17, 1868, giving the school the title of "The Arkansas Deaf Mute Institute" and locating it at Little Rock.

In 1887, another significant milestone was passed in the erection of a separate school building for black deaf children. Black teacher, Pleasant A. Glenn, was put in charge and "faithfully performed her duties." The first black pupil, as tradition had it, was Ned F. Bennett, who years later left the school a legacy of almost $2,000 from his savings of many years. Little Ned's bed was at the far end of the white boys' dormitory.

Article from the Arkansas Gazette, October 1, 1899: "THE DISASTROUS FIRE OF 1899"  - What was once the handsomest view in the State of Arkansas was a desolate scene of ruin when the sun rose yesterday morning. The fire which broke out at 2 A.M. at the Deaf-Mute Institute (September 30th) burned itself out by 5 A.M., after destroying everything within reach.

After the destruction of the buildings, the board ordered the construction of three frame buildings, 16 by 120 feet, for temporary use for school and dining rooms; these buildings, ready for occupancy the following January, were inexpensive box houses with battened sides and shingle roof. The superintendent occupied the small hospital building and the pupils were crowded for sleeping quarters into the black school and industrial building, the black children being moved to a rented house on 17th and Ringo Streets. 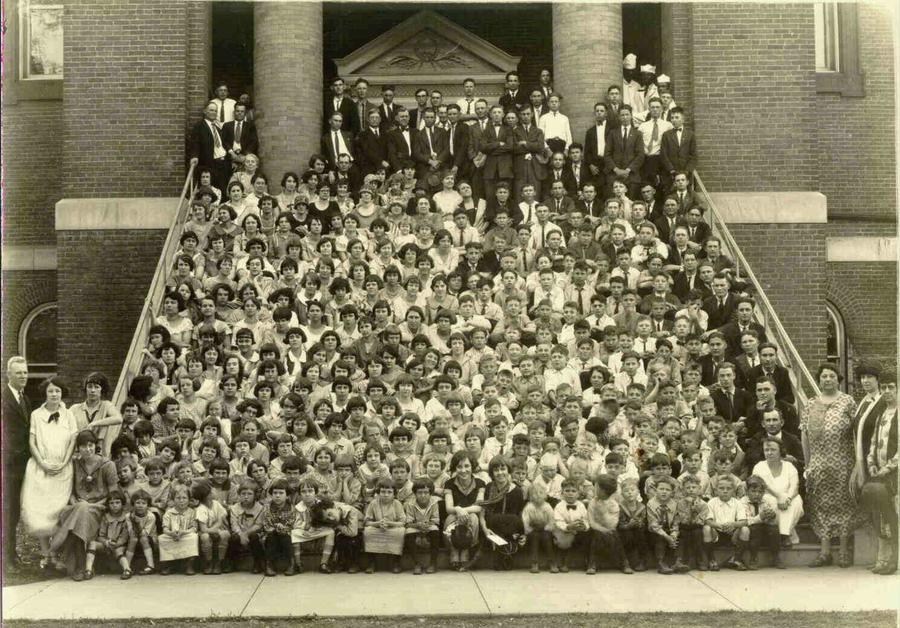 Arkansas School for the Deaf, circa 1923

For the next 20 years after the fire, the school progressed steadily. In 1923, a legislative act changed the name of the school to Arkansas School for the Deaf (ASD). Under superintendents, Bess Michael Riggs who is Child of Deaf Adult (CODA), appointed in 1926, and Roy G. Parks, appointed in 1952, the number of buildings and students increased dramatically. From 1961 to 1965, almost an entirely new campus was constructed following a storm that destroyed many of the older buildings. In 1965, ASD was desegregated; from 1949 to 1965, all African-American deaf children had studied at a new school building located at 22nd and Madison Street.

A training program for teachers of the deaf was initiated in 1956 in conjunction with the University of Arkansas (UA) in Fayetteville. The program was located on the campus of ASD until 1969 and offered certification to teachers of the deaf. Approximately 60 teachers were trained before the program moved to the UA campus.

The current superintendent is Dr. Janet Dickinson, who was named to that position in 2015 as 31st superintendent. Since her appointment, ASD has added a new culinary arts program, horticulture program, and opened the new Arkansas Deaf Career Center. Students continue to thrive in an educational environment that celebrates learning and provides a wide array of extracurricular opportunities. Students participate in varsity boys and girls basketball teams, football, volleyball, Special Olympics, track, and cheerleader. Students also compete in an Academic Bowl, art competitions, and other celebrations of academic achievement.

and on other days by appointment.

It is closed during school holidays.

For more information, email the Museum at museum@asd.k12.ar.us